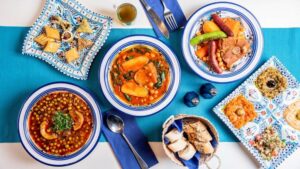 Tunisian food is well known for its eccentric taste and odd combination of ingredients and spices that
result in some of the most exceptional and signature dishes.
While Tunisian food is a treat, it is traditional dishes that really stand at the top of the list as the best pick
for luscious and appetizing meal. 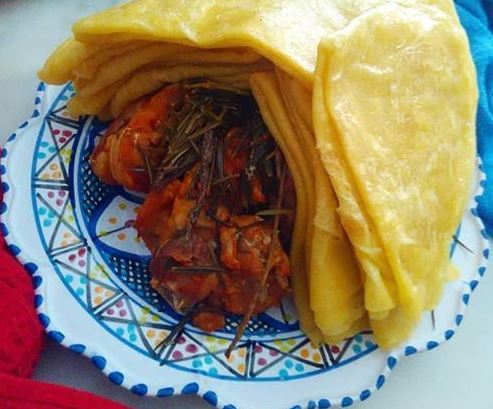 “Ftet” is a fine kind of homemade Tunisian food using a tortilla mixed with curcuma usually cooked on
low to medium heat using a traditional pan designed with this purpose in mind.
The bread itself is made primarily of flour and/ or semolina mixed in with curcuma and olive oil. The final
result is nothing short of mouthwatering.

“Ftet” is often served with rosemary-meat (usually sheep), or with a number of complimentary dishes.
Ultimately it is extremely satiating and you would no doubt love to have seconds.

“Couscous”, a Tunisian-food-special that deviates greatly from the Moroccan and Algerian counterparts.
Tunisian “Couscous” is considered a staple in every household and is widely referred to in celebrations.
“Couscous” is not very difficult to cook. The full recipe requires “couscous”, olive oil, salt, tomato, a very
peculiar mix of traditional spices, and beef. The entire process should take bit over an hour to be
completed.
The final result is similar in look to “Bourzguen”, but while the former has a sweet taste, the latter differs
significantly in this particular regard. “Couscous” is known for being the top pick for spicy Tunisian food
in the country.

“Borzguen” is a complicated dish that is particularly renowned amongst all the Tunisian food.

It is a variation of “Couscous” that incorporates a mixture of ingredients with different techniques.

In essence, “Borzguen” is a variation of “Couscous” that incorporates divergent cooking method. To make
“Borzguen”, odd combinations like milk and sheep meat become plausible to use in one sentence.
However, despite the unusual blend it all culminates into a satisfying result in look and taste alike.
Adorned by various kinds of nuts and festered with hints of spices, the unique taste of “Borzguen” is like
nothing you’ve had before. 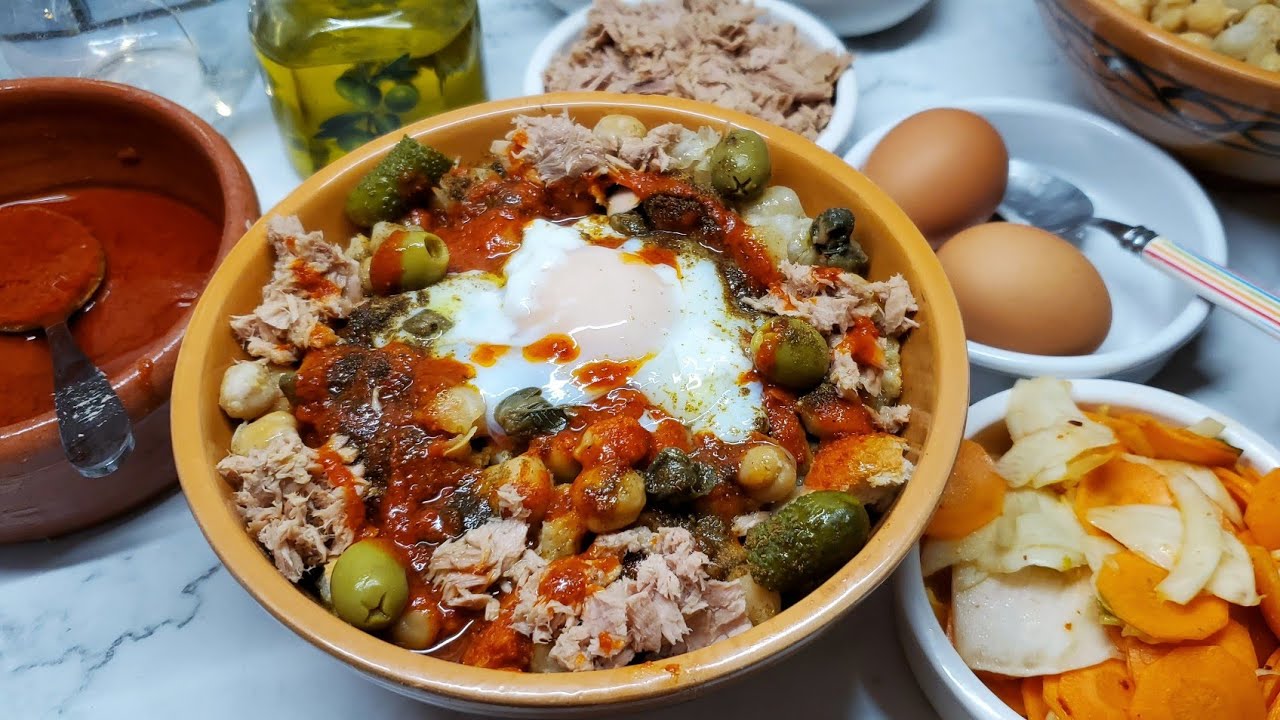 “Lablebi” is a very famous traditional dish that hales from Turkish descendance. It was adopted and
changed to suit the Tunisian food unusual mixes.

“Lablebi” is easy to make requiring stale bread and boiled chickpeas with any added flavor you would like to include.
That could range from a wide array of spices or other ingredients like olive, caper, tuna, or whatever suits
you.
“Lablebi” is commonly preferred during winter season, thanks to the different combinations of spices and
other savored additives, that help warm you in cold winter days.
Conveniently you needn’t travel far to taste “Lablebi” for yourself, the dish is popular in all states and
regions, simply make sure to schedule your visit near or during winter so you would taste this yummy
Tunisian food masterpiece.

5-Sandbread, beauty of the Tunisian desert

Sandbread is yet another Tunisian specialty that sure to be to your liking. The bread baked and made in
the sands of the Tunisian deserts.

While there are different methods and marinates with which one may choose to lace his piece bread, the end result is mouth-watering to say the least.
It would be a shame to confine this splendid Tunisian food recipe to strict requirements, and since the
sands of the desert are not accessible to city inhibitors, slight alterations have been made to the recipe to
make it fit to be baked in an oven from the comfort of your own home.
Flour, baking powder, olive oil, milk, sugar, and spices. This is the basic components for your bread,
however, you may choose to add in few ingredients of your own.

“Mloukhiya” is by far the most recognized, frequently cooked Tunisian food in a number of occasions and
for a satiating full-course lunch.

Like “Lablebi”, “Mloukhiya” is common in all states and you would be able taste it anywhere you would choose to go.
“Mloukhiya” is a complex dish that requires patience above all else. If you wish to cook this tasty dish
yourself, you would need “Mloukhiya”, a wide range of spices, beef, garlic, and time.
In Tunisian traditions, “Mloukhiya” is cooked over night and sometimes over 24 hours for optimal results.
But modern amenities would allow you to shorten the process considerably, so you may enjoy the
palatable Tunisian food jewel.

All in all, if you are someone who is fond of trying out new foods and different cuisine styles, Tunisian food
is surely the right pick for you with its peculiar combination of spices and a variety of foreign styles into
their daily meals, you wouldn’t be disappointed to have paid this north African country a visit.

And if you are looking to expend the horizon of your trip to include an educational aspect, then look no further than Dougga and Bulla Regia, two archeological destinations conveniently placed in Beja and Jendouba where you would enjoy palpable traditional Tunisian foods and tour Roman ruins.

Roman Ruins: Discover the standing testament of ancient past