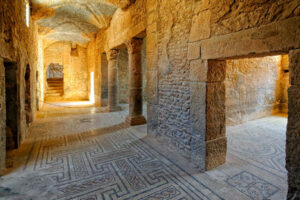 If you would like to extend your vacation into new horizons beyond the festivities and hotel life, then you would definitely love a trip to Dougga; one of the most famous and well preserved sites of Roman ruins.

Immerse yourself into the copious history of Tunisia and learn of the diverse cultural heritage left by the roman empire.

Venture towards the countryside of Tunisia and adore the exquisite natural views surrounding Teboursouk, a small town in the governate of Beja. within it resides one of the most famous, well-preserved Roman ruins site in north Africa, Dougga

The tour includes exclusive access into the wealthy estate of the Dougga site. covering the extensive grounds that spam over 160 acres. The site features a number of monuments that stood the test of time and are now a testament of what once was.

Throughout the tour, you will be escorted around the premise of Dougga and allowed into some of the structures.

visit the renowned Roman Theater where public gatherings where held and some of the finest plays where performed. The magnificent round structure is constructed to accommodate over 20.000 spectators.

3. Roman Ruins: The Roman Theater, the perfect destination to learn about the demolished empire

The theater is also fitted with interact passageways that lead to different levels. In present day, this spectacular edifice  is being engaged to host the International Dougga Festival in Tunisia.

The capitol, where political endeavors forged the roman society into its former glory amongst the most sophisticated and intricate hierarchy in ancient times. It was also accustomed to be a place of worship to the Roman Gods. These Roman ruins were attended for prayers by believers who sought the capitol as a temple.

The triumph arch, depicting a grand stone monument erected to commemorate victories. Constructing an arch is also correlated with crowning new kings or stand in memorial in the event of their death.

Across the world, not many triumph arches remain as Roman ruins are considered a rare archeological discovery. So much so that the one in Dougga is recognized by the UNISCO for being amongst the best preserved monument.

6. Savor the feel of luxury, in the Roman baths

Forum, bath houses, complementary structures that enunciate the old traditions of the roman empire. Of all the Roman Ruins, the bath houses are amongst the most embellished and ornamented with splendid tiles, mosaics, and artwork.

Throughout the tour you will be encouraged to partake in recreational activities to garner that personal touch in your experience.

Keeping up with the Roman ruins theme, the tour will also include the site of Bulla Regia. A neighboring archeological location where more history is unveiled. The unique structure of this site is what makes it delightful to tour. Bulla Regia’s Roman ruins are mostly found underground.

The city of Bulla Regia consists of dorms architectural structures carefully crafted from stone and is far reaching beneath the grounds.

The tour will include a visit to the atrium of a large open-area vault holding gallons of water. this particular Roman Ruin is massive, as it is connected to other areas. Mosaic floors that lead to the House of Hunt. An elaborate residence that splits into numerous sections.

8. Bulla Regia, The House of Hunt

Withing the underground city of Bulla Regia, lie the remains of an old church, connected to the House of Hunt. From this structure you will also be guided into an extensive basilica that compliments the magnitude of this Roman Ruin.

In short a tour to the site of Dougga and Bulla Regia is never disappointing. The tours offer plenty of entertainment and educational qualities to stand as the best pick for those looking to get the most out of their trip. Situated in the fabulous northern states of Beja and Jendouba, marinated with impeccable natural views, Dougga is your destination for a soothing, fun, and comforting trip.

Discover and book those fun tours: